We all might have heard of some examples of coexistence of the wild animal species with human societies. Such examples from ancient times, when the primitive societies were supposed to be in close proximity to nature, are quite imaginable. But with any such examples from contemporary times, besides coexistence, we also expect some degree of compromise. During my time in South India, I came across a few villages where the wild waterbirds coexisted with the human societies; Kokkre Bellur being one of them. But what I witnessed at Kokkare Bellur was coexistence with maximum expression and least compromise.

Kokkare Bellur, an otherwise ordinary South Indian village in Mandya district of Indian state of Karnataka, has become famous as the nesting site for wild waterbirds, Painted Storks and Pelicans. Generally, these waterbirds are known to prefer the island trees as nesting sites and are quite shy. But in Kokkare Bellur, these waterbirds, without any dilution of their wild nature, live in close proximity with the humans. During the nesting season, most of the trees of the village become homes for the birds as a result of which the birds sound could be clearly heard even from the distance. After witnessing the situations like people moving over the ground with their cattle under the same trees on which the birds’ nest, I realised that the villagers had won the confidence of the birds that they would not be harmed in any way. Perhaps the villagers had compromised on certain aspects to make the birds feel safe and so had allowed them to express their true nature. 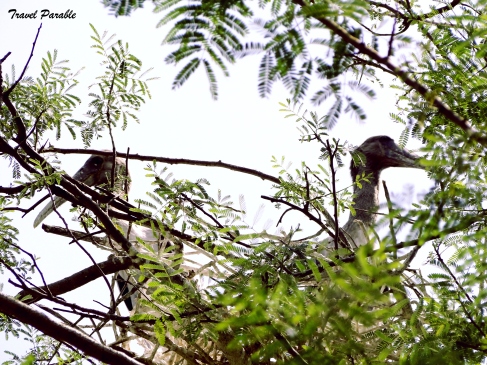 Nests on the canopy

Cattle under the same trees on which birds nest

While observing the birds on the canopy of multiple trees behind one of the major temples at the centre of the village, I heard the low-intensity noise of some drums. On the front side of the temple, hundreds of people were moving towards and gathering at the central place. Most of the people were just walking, many of them had a variety of Indian drums, while a few others were holding big decorated wooden structures, supported by their arms, above their heads,  which perhaps could not be kept on the ground due to their higher spiritual value. Due to the language barrier, as none of the villagers knew Hindi or English and I had no knowledge of Kannada (the language of Karnataka), I did not understand the meaning or significance of that event. It appeared like any kind of annual village gathering. However, I was clear that it was a celebration of faith, a Kannada Hindu festival, in which whole of the village was involved. Men and women of all ages had their active involvement. Soon they all started to play drums in chorus and the combined intensity was so loud that noise must have been disturbing to the storks. Soon a decorated bullock, whose neck and the horns were dressed up with garlands of colourful flowers and the head was covered with Indian currency notes, appeared in the view. The holy animal was taken to the temple for some rituals and soon after there were some mystic dance performances by some of the people on the heavy synchronised beats of the drums. It looked like an attempt to appease the deities. The holy animal was taken to the whole village and people, outside their homes, welcomed the animal and sought the blessings. 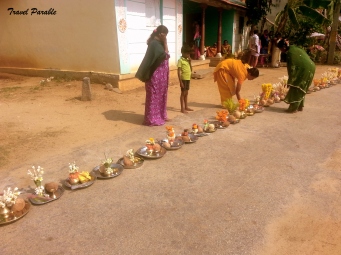 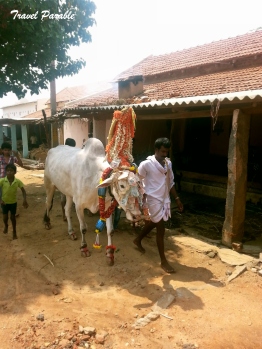 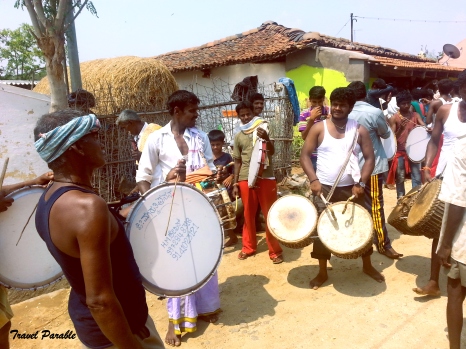 Two undeniable aspects on which India is considered rich are Biodiversity and cultural diversity. However, in this rapidly evolving nation, sometimes both are overlooked and so need to be understood and discussed. While the Painted Stork is counted as a near threatened species, many of the local cultural events are also becoming bleak in the light of migration of people from the villages to the growing towns and the cities. As India is an amalgamation of diverse cultures, the first step in the direction to explore India is to recognise and understand as many cultures as possible. In Kokkare Bellur, I experienced the side by side existence of both, the biodiversity aspect and the cultural aspect. In the beginning, it appeared as if there was any kind of compromise by the human society to provide an upper hand to the birds. But later I realised that perhaps the birds had also allowed the villagers to show their social aspects, which sometimes could be much disturbing for them. Perhaps the birds of Kokkare Bellur have got adapted to live in the presence of human activities. After observing all this, I was thinking who were the primary residents of the place. If it were the humans who had allowed the birds to settle in their village or had the Birds allowed, as primary residents, the humans to express themselves? Both, the humans and waterbirds, live together in a village which has got its name from Kannada word, Kokkare, for Painted Stork.

28 thoughts on “Coexistence and Expressions”