During primary school days, 1st or 2nd standard I guess, I and most of my classmates used to bring down a mountain and valley landscape in our drawing notebooks, having an isolated hut in the centre of the Valley, rising sun from the lofty peaks and a river coming from the mountains and passing near the right side of the house. After two decades, I come across a place which took me back to those colourful memories. From the top of a hill, I saw a small traditional Himachali home and all pearls of nature scattered around it: agricultural fields all around and the snow peaks in the background; a snow melt freshwater stream on the right side and a lush green mountain forest at some height; fresh cool air and pollution free clear sky. During sunshine birds’ songs were flowing from all the directions while night must have been of an unhindered sky of milky dots. The whole terrain was reigned by a marvellous beauty and perfect peace where time pace was observed to have slowed down significantly. This would have been inevitable for a nature lover to resist his head to think about living so close to nature. I realised that if I had been there 6-7 years before, I would have not given any second thought to settle down there. After seeing a number of beautiful isolated places and spending a considerable quality time in some remote areas, I understand that such places have a potential to make someone to be in a paradise for a moment. But, if someone is asked to settle down there, life would not be that easy, especially for someone who has learnt and become habitual to live in complicated and competitive surroundings, with all modern facilities and allurements around. Although everyone wants, sooner or later, stability in life and wishes to be free from the sustenance and maintenance cycle, his/her ambitions and ego always keep him/her, more or less, in a complex state of mind. Throughout the history, people have been observed to migrate from villages to the nearest cities in the hope of a better life, better education. That’s why that home might be isolated and the area was less populated.

Soon I realized that it was a misconception to assume that the home was disconnected and deprived of basic facilities. That home was found to be a part of a beautiful small village; stood away from the rest of the homes. Although vehicles never appear that frequently, the nearest link road was not more than a distance of around 200 meters. Electrical poles in the fields testified the presence of power supply. An artificial water canal, which must have been coming from nearest water stream, was there in front of the house. A TV dish appeared popped out from an old fashioned window. A government school was not very far away, as evidenced by the presence of the school dressed children. A medical college was not more than a distance of around 25 Km, while an Agricultural University, a CSIR Institute and an Ayurvedic hospital were in the vicinity. Nearest main market, which was not as big and crowded as we see in metro cities, was around 10 km away. I suppose that the main market is never visited by the villagers on daily basis, as most of the basic things of survival could be easily collected from the surroundings and small shops of the village.
That perfect blend of nature and small scale anthropological modifications makes me to feel that life is an easy and beautiful journey which just has been complicated in search of supplementary happiness. Everyone gets all basic things of survival from the nature. Nature has sufficient matter and energy to fulfil the needs but just falls short to satisfy the greed. We often appreciate the things which are wanting while complaint about the ones which we have. A very common disorder most of us are suffered with these days is “This is bad, that is good” syndrome. A mountain looks amazingly beautiful from the valley while a valley appears to be in perfect order from an altitude. We search for peace when entangled in problems of life, while crave for new challenges of life when peace seems guaranteed. It doesn’t matter where we live but how do we live. That home also represents a home within all of us, some thankful and some unsatisfied. In pursuit of happiness, some may lean towards Buddha; others may walk over the footsteps of Bill Gates. Is it really possible to be a combination of both; Buddha from inside and Bill Gates from outside? Sounds very odd, but few modifications in surroundings of home could make us feel in harmony and provide an integrated life. Everything is good indeed. My childhood painting was undoubtedly highly integrated product of a passionate mind. 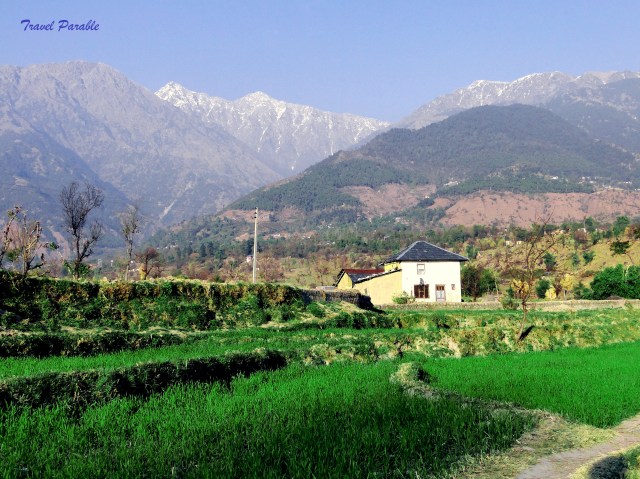